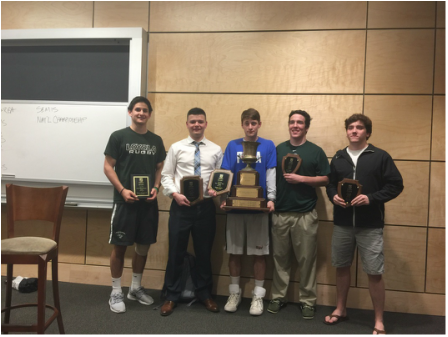 ​Thank you to our players, coaches, trainers, friends, family, and our alumni for a fantastic season.
​
April 23 2016
Loyola participated in our second 7’s tournament of the semester at Rocky Gorge in Maryland.  We struggled early on in our first two matches against Georgetown and Navy.  In the third match we played a tough Salisbury team with a very dedicated 7’s team.  We came out strong and it took Salisbury by surprise.  We frustrated them early and took advantage to go on to win 19-10.  In the final game against Frostburg, we took the lead early but crumbled late and lost 24-19 in a sudden death overtime.  Another great effort by Loyola.  All of the teams in this tournament have dedicated 7’s team that practice only 7’s.  We have been practicing 15’s all semester so a lot of the players on our team struggle with the new kind of rugby game.  Trys were scored by Bobby Gordon (4), Vinny Sireci, and Kyle Higgins.  Next week is Salisbury at home on the FAC field.  Come out and support us in our final match of the year!!!

April 15 2016
In front of another massive crowd, UMBC traveled to Lugano field for the senior’s last match as a Loyola rugger.  13 of the 15 starters for Loyola were seniors.  The seniors have played UMBC every year for the past four years and have lost every time so they wanted this game badly.   The game started ugly for Loyola but we were able to switch momentum mid-way through the first half to take the lead.  With that momentum, Loyola was able to explode for 47 points on our way to a 47-29 victory.  It was a great team win and the seniors were able to walk away from Loyola rugby on a high note.  The seniors led the team to victory and we wish them luck as they move forward with their lives.  Thank you to all of the seniors for all of their hard work over the years.  Trys were scored by Matt Nadar(3), Bobby Gordon(2), Anthony Derosa, Brian Wright, and Kyle Higgins.  Great Job Loyola and thank you to all of our fans.

April 9 2016
Loyola traveled to Newark, Delaware to take on the D1A Delaware Blue Hens.  In the coldest match of the year thus far, Loyola was defeated 22-48.  It was a tough first half for the Greyhounds but the team came together towards the end of the match and scored late three tries.  Delaware is one of the best college rugby programs in the USA and we put a few tries in and played them tough.  Trys were scored by Kyle Higgins, Brian Wright, and Vinny Sireci.  Next up is UMBC at home Friday night at 7 for the seniors final game.

April 2 2016
Catholic, who knocked us out of the playoffs in the fall, came to town on Saturday.  In front of a massive crowd, Loyola was out for revenge and delivered with a 38-27 victory.  Catholic came out strong with an early lead but Loyola fought hard and came back for the win.  We controlled possession all game and the back line was able to break through Catholic’s line for some key long runs.  All-around, it was a great team win.  Trys were scored by Shel Rawson(2), Bobby Gordon(2), Brian Wright, and Kyle Higgins.  Loyola Rugby would like to thank all the fans who came out for support.  Next game @Delaware at 3:30.
March 19​​ 2016
Loyola Rugby traveled up to Randel Island, New York to play in the annual Four Leafs Tournament.  In the first match of the day, Loyola defeated Binghamton 15-7.  We got off to a slow start, but play great as a team to finish the game with 15 unanswered.  The second game against Hartford was a defensive battle. Loyola was able to squeeze out another victory 12-7.  The third game against Babson was a tough one.  After an early score, Loyola had all the momentum.  As the 1st half came to a close, Loyola wound up a man down with a red card and a penalty try was rewarded to Babson.  Loyola played extremely tough but playing a man down the whole 2nd half was a tough task.  We played tremendous but Babson was able to come out on top 21-7. This was a heartbreaking loss.  3 freshmen, Nicholas Bonelli (1) Ryan Eschmann (1), and Jack Ramirez (1), scored their first trys of their Loyola career.  Senior Chris Agnone also put one in.  Another great tournament for Loyola Rugby.  The team played great all tournament but unfortunately ended in a heartbreaking matter.  Good Job Loyola!!!
March 12 2016
Loyola took 12 players down to Mount Washington in Virginia to play in Loyola’s first ever 7’s tournament.  Despite many of our players never playing 7’s before, Loyola was excited to be a part of this tournament.  In our first game, Maryland got off to a quick 17-0 lead.  However, Loyola never gave up and scored 10 unanswered to make it a close game.  Time ran out quickly and we dropped the first one 17-10.  Next, Loyola played the runner-ups in the CRC7s tournament Kutztown.  It was a tough game for us but we played really tough as we lost 45-0.  Mary Washington got out to a big early lead in the next game.  Another late push by Loyola wasn’t enough as we dropped that game 31-12.  Loyola took on VCU for the final game.  We came out with fire and got an early lead and never let go.  This was a great team win as we won 28-19.  Throughout the whole tournament, trys were scored by Bobby Gordon (7), Shel Rawson (1), and Patrick Frick (1).  Despite going 1-3, this was a fantastic effort by Loyola.  We came into this tournament with only 1 day of 7s practice and were also the of non D-1 team there.  Great first collegiate 7s tourney! Good Job men.