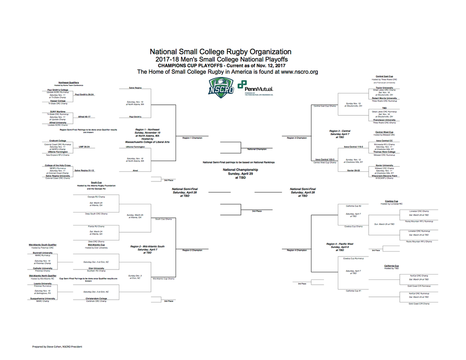 @Navy - W 58-0
Baltimore Chesapeake - 0-0 (score not recorded)
@4 Leafs
Binghamton University - W 31-7
Seton Hall University - W 41-0
University of New Haven - W 37-0
NY Maritime - W 23 -5
University of Rhode Island - W 7-5
Tennessee Tech - W 52-15
Iowa Central Community College - L 100-33
Salve Regina - L 27-26
April 29, 2018
The team competed in the third place match against Salve Regina of Rhode Island. It was an intense back and forth match that tested the heart and desire of of each team. Salve gained an early lead of two tries that put Loyola on their back foot, but they managed to fight back and take a lead later on in the second half. Unfortunately for the Hounds, Salve Regina managed to score a last minute try to win the game 27-26. Congratulations to Loyola for an unforgettable season, as they finished #4 in the country for the first time in LURFC history. Never say die.
April 27, 2018
The team traveled to Life University in Marietta, GA to compete amongst the top teams in the nation in the Final Four for NSCRO. They took on #1 ranked Iowa Central Community College, and came up short 100-33. Loyola had a slow start to the game, but managed to score five tries against a team that hasn't let up more than three points all throughout the national tournament. The third place game will take place at Life University against Salve Regina on Sunday, April 29, 2018.
April 8, 2018
The big game did not disappoint.  Tennessee Tech and Loyola met in Clayton, North Carolina to fight for a spot in the National Championship.  Loyola dominated this game from start to finish.  Tennessee tried to use their size to take us down but the toughness of Loyola did not let them.  Loyola beats Tennessee Tech 52-15 and are Mid-South Cup Champions and Final Four bound!
March 24, 2018
Loyola traveled to Randell’s Island to compete in the annual 4 leaf’s tournament.  Having never won this tournament before, Loyola came out with a chip on their shoulder.  Loyola went 4-0 in pool play beating Binghamton University, Seton Hall University, University of New Haven, and NY Maritime to get to the finals.  In the final, d1 team University of Rhode Island came out strong and took an early lead into halftime.  Loyola “Never Say Die” attitude brought them back to win the tournament for the first time ever!  What a performance by these Loyola ruggers!